Marathon runner Sam was obsessed with chasing faster speeds and longer distances every time she pulled on her trainers. But when perimenopausal dizzy spells and hot flushes hit in her early 50s, she realised things had to change. Now she’s switched her long-distance runs to strength training and she’s never felt better. 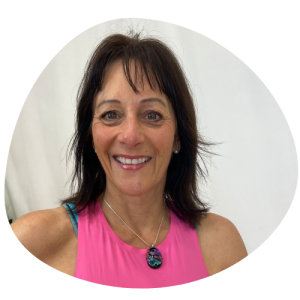 “When I first started running, back in the 90s, recreational running wasn’t yet a thing – people didn’t ‘go for a run’ on a Sunday morning. But then I had pretty good reason to give it a go.

My brother had just left the army when he was killed in a motorcycle accident. He’d been about to run the London Marathon for an army charity and so after he died, the charity rang me and asked if I’d like to run in his place. I was a 30-year-old working mum with two small children and no experience of running, but I decided yes, I’d go for it.

So I embarked on the training to run this marathon and I just got the bug. I loved it so much that I gave up my job in further education to become a fitness coach because I wanted to encourage other women to enjoy it as I did.

Fast-forward a few years and as I reached my late 40s, I noticed I was starting to run in wobbly lines. I was used to covering up to 20 miles, so to suddenly find myself so dizzy that I couldn’t run straight was scary. My mind jumped to the worst scenario – that I had a brain tumour. Thankfully brain scans all came back clear. And strangely, as soon as I knew it was nothing serious, the dizzy spells actually eased up so I put it all to one side and kept on running, but looking back now, I think that was the beginning of the perimenopause.

Then as I reached my early 50s, I became uncharacteristically anxious – I’d find myself worrying about whether the dog would run into the road when I took her for a walk or fretting about whether people liked me. My husband was really supportive but he was the only person I felt I could talk to. I was a figurehead to so many people – my clients, colleagues, children – and I felt I owed it to them all to hold it together.

My anxiety reached a peak when I was about 53 – but at the time I didn’t realise how bad I was and certainly no one else would have had a clue. I was running a business (a first aid training company), I had my coaching, and I was getting up on stage giving talks to 500 people at a time. And no one asked me how I was, because that’s just how it is with women of this sort of age – we’re busy looking after everyone else but no one’s looking out for us.

Then the hot flushes and night sweats kicked in and the penny dropped. So, I did my research, found out as much as I could about the menopause and how to manage it, then went to my GP and said I wanted to give HRT a go – my symptoms were bad enough by now that I knew getting rid of them would be life-changing.

Within three days of starting the HRT, I stopped waking up at night with hot sweats. It took another 10-12 weeks to really settle down. Now, symptoms still come and go depending on how stressed I am – especially brain fog – but on the whole, combined with other life tweaks like eating well and making time to laugh with friends, it’s helped me feel like myself again.

Even bigger than the HRT though has been the change to my fitness focus. I’d been evangelical about running for so long, but then I found myself starting to get knee and hip pains and putting on weight no matter how far or how fast I ran. Something had to change.

As I started to learn about menopausal health and how it can affect your bones and muscles, I realised I needed to focus not just on stamina and speed, but on strength. I began looking at exercises that build muscles and would give me the same feel-good buzz. And, importantly for me because I love to eat, which would allow me to eat cake! I also started to think about longevity – I didn’t want someone wheeling me to the toilet as I got older, so I wanted a workout that would help me stay fit and active well into my 80s.

I now work out twice a week for 30 to 40 minutes – a simple range of squats, deadlifts (lifting a barbell off the ground up to my waist or torso), and a lot of upper body exercises for arms and shoulders with dumbbells.

I make sure I get a mix of cardio, strength, and restorative fitness (stretching etc) too because they’re all important – and it’s what I now advocate in my coaching because the women I teach are mostly 45+ and that’s what our bodies need. So I still run with a local group but my personal focus is much more on building strength.

Strength training really has been a game-changer. It makes me feel confident. Motivated. Smug that I can do something for 30 minutes and it’s done. And surprisingly to me, I feel more empowered than ever. When I was younger, there was always a finish line, but now I’m at the stage where there isn’t – this is my life and if I don’t do my best to be strong and healthy and grateful for what I’ve got, then I’m missing something. Instead of tearing down the motorway, I’m going down all the little side roads enjoying the view. And that’s hugely liberating.”

To find out more about Sam’s coaching business, Midlife Makeover, which specialises in helping women 45+ find their feel-good fitness, head to www.midlifemakeover.co.uk