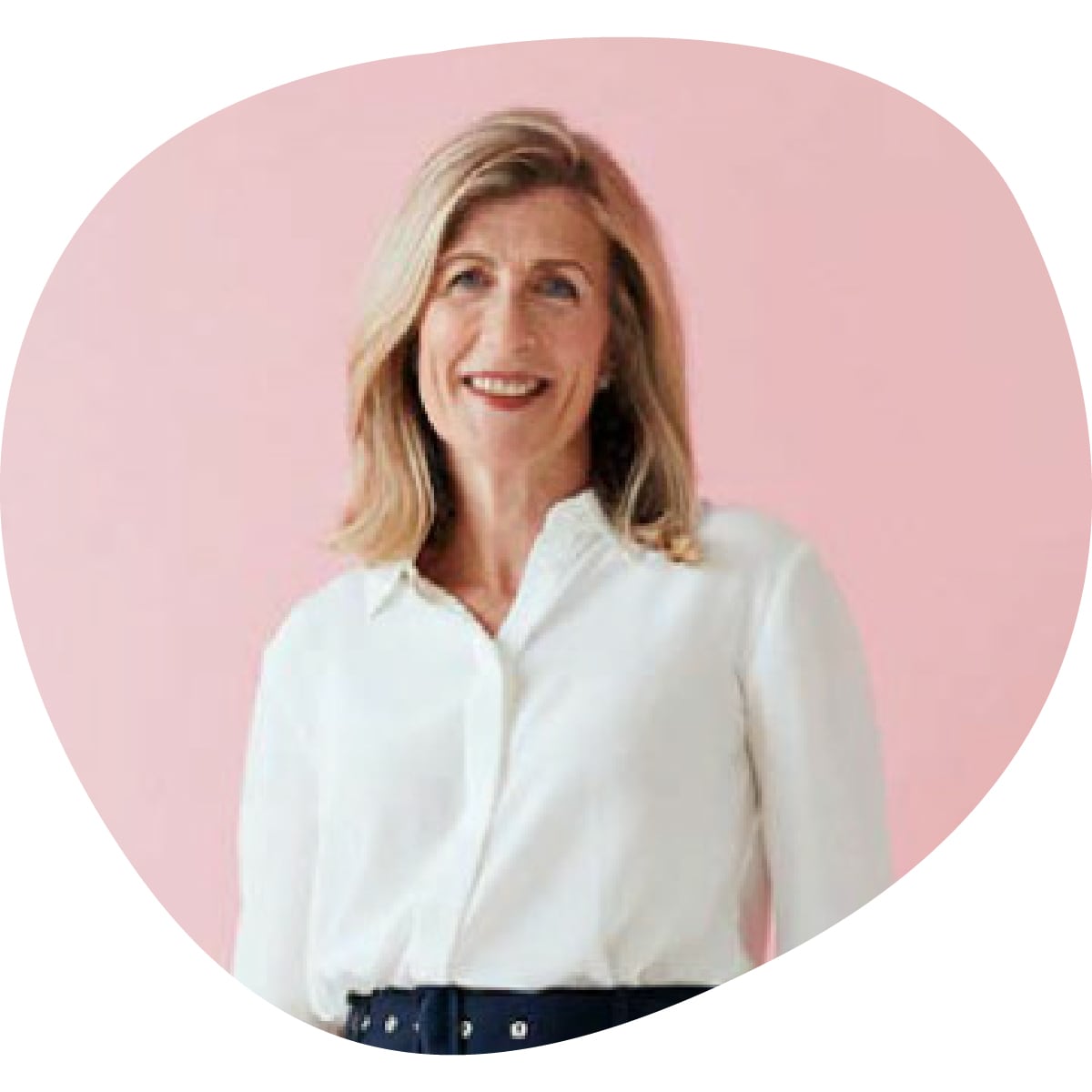 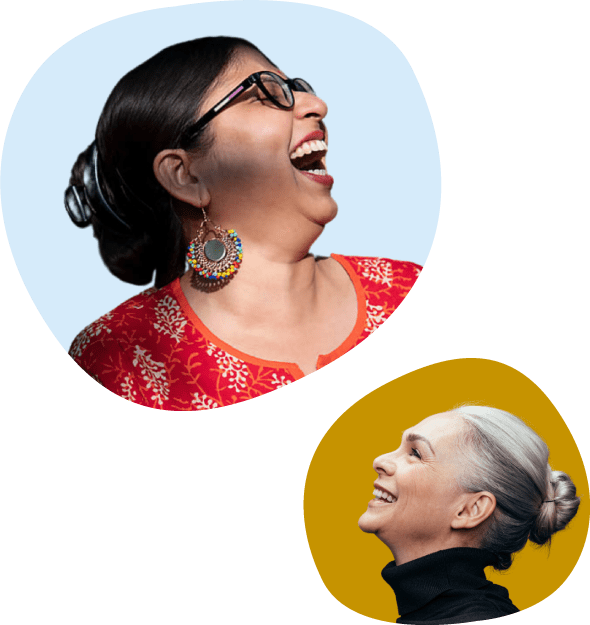 Women and Equalities Committee Menopause and the Workplace Inquiry

We welcome the Women and Equalities Committee’s call for evidence to collect views on menopause and the workplace and are presenting an evidence-based submission that also draws on our professional and personal experiences. In April of this year, we commissioned BritainThinks to undertake qualitative and quantitative research with men and women across the UK to develop a holistic understanding of perceptions and experiences of the menopause. This work, alongside other published data, forms the basis of our submission. Our submission references the themes outlined in the submission guidance and provides an overview of our expertise in women’s health, specifically the menopause.

Dr Spencer qualified from Cambridge University and holds Membership of the Royal College of Obstetricians and Gynaecologists and Membership of the Royal College of General Practitioners. She initially trained in obstetrics and gynaecology where she gained a Doctor of Medicine for research in fetomaternal medicine. As well as her role of clinical director at My Menopause Centre, she is a practicing GP partner and registered menopause specialist in Meanwood, Leeds, where she treats a socially and culturally diverse patient population of 15,000. She single handedly set up and run a CCG (Clinical Commissioning Group) funded specialist menopause service from the Meanwood Group Practice since 2018. Patients are referred into this clinic from GPs and hospital consultant specialists, and Dr Spencer sees around 260 new referrals a year. This is also a culturally and socially diverse group of patients where the physical, mental and economic impact in

Dr Spencer wrote the menopause training module for doctors.net and has written for the Primary Care Women’s Health forum publication, Her Life Her Health, on a variety of menopause related topics.

Both Dr Spencer and Ms Normoyle are passionate about raising awareness of the menopause, the symptoms and the range of treatment options so that women thrive, and not just survive, through this stage of their lives. The benefits of this will be felt across the whole of society and not just the workplace.

What is the nature and extent of discrimination faced by women experiencing the menopause? How does this impact wider society?

The menopause is still a taboo

The menopause is a natural part of a woman’s life, and all women will experience it. Currently, there are an estimated 15.5m [2]  women across the UK who are in some stage of the menopause transition.

Despite this, and despite the very welcome and much needed increase in public and national conversation about the menopause, our recent research shows the long-standing menopause taboo is still very much in place: 47% of the public agree it is a taboo topic in UK society – rising to 72% of perimenopausal and menopausal women[3]. As one of our participants explained:

“I don’t think we speak about it actually. Menopause is almost like a bad word. I don’t remember my mum or aunties talking about it. So no one ever knew enough.”

This taboo feeds directly into low awareness of the menopause as a women’s health issue, and low knowledge and understanding of this phase in women’s lives, including amongst women themselves.

In wider society, knowledge and understanding is even lower: 2 in 5 (43%) of the public agree they don’t know much about the menopause and just a third (33%) say that they would know how to support a woman who is going through the menopause.
This lack of knowledge, coupled with difficulties talking about menopause, has real-world impacts. Overall, without the right support and treatment, the symptoms of the menopause can have a negative impact on all aspects of a woman’s quality of life – home, work, social and sex life as research conducted by the British Menopause Society shows: 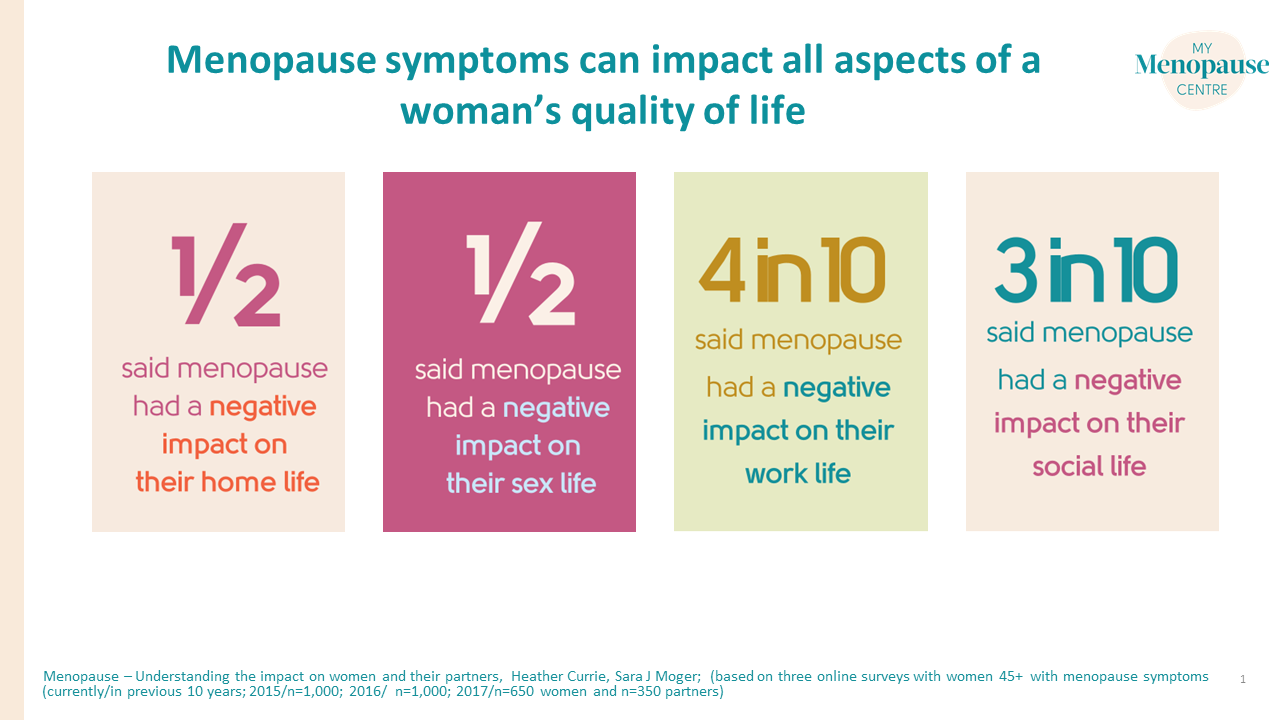 Ultimately, for some women, the cumulation of these challenges can lead to a loss of identity:

“It takes your confidence away. It took a lot of years out of my life when I wasn’t the same as I used to be.”

Menopause symptoms are impacting in the workplace

In research we conducted in the Spring with BritainThinks, over two thirds of the menopausal women we interviewed agreed that the symptoms of the menopause can have a negative impact on a woman’s performance and on her career.

This is playing out in the workplace – research by Bupa and the CIPID[6] has shown that almost one million women in the UK have left their jobs as a result of menopausal symptoms. That’s a staggering figure, given the organisational impact of this loss of talent and impacted productivity, and clearly illustrates the need for workplaces to do more to support women in this stage of their life.

Our research shows very clearly that the more prepared for the menopause a woman is, the better her experience of it will be. This underscores the importance of education and information in enabling women to feel empowered to talk about their health and the support they need – whether at home or at work – and shows that women who feel prepared for menopause have better outcomes.

This finding highlights the importance of building knowledge of the menopause amongst younger women so that they’re prepared for what’s to come. In our survey, over half (53%) of women aged 18 – 44 interviewed agree they ‘don’t really know much about the menopause’, compared to 20% of women aged 45 – 64.

The menopause is everyone’s business

But it’s not just women we need to focus on. This data also highlights the need to make the menopause everyone’s business by tackling the taboos around it and showing that it affects not ‘just’ the 50% of the population who experience it, but everyone around them… their families, friends, and employers.

Men – whether at home or at work – also have a key role to play. With 67% of the men surveyed agreeing that the menopause is not an issue which affects them personally, it’s clear there’s a real need to raise awareness of the menopause, the impact that symptoms can have and the best way to support those going through it too.

Workplaces clearly have a key role to play here, which will benefit not only them, but also society more widely.

What is the economic impact of menopause discrimination?

Symptoms have an impact at work – performance, engagement, retention

As mentioned above, around 8 in 10 women will experience symptoms of the menopause, and research has shown that the symptoms that can have the most impact at work are related to mood and cognitive function: 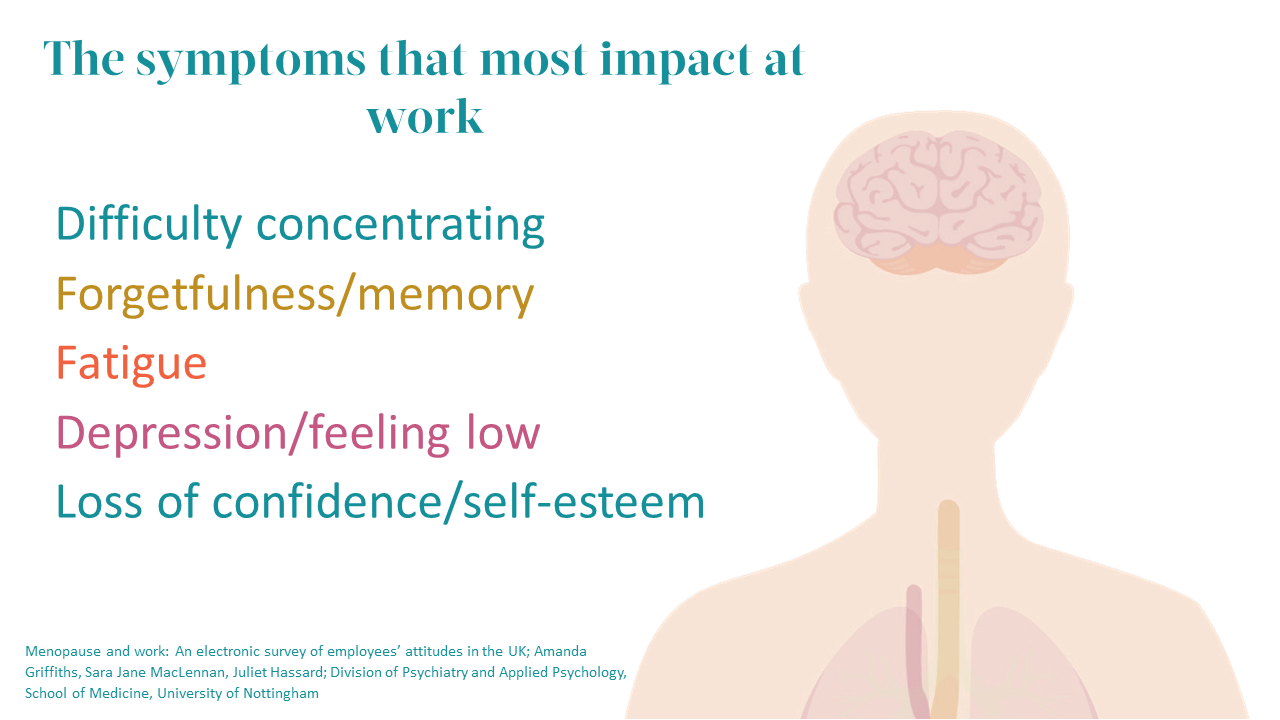 Multiple studies show the negative impact that the symptoms of the menopause can have on women’s workforce participation i.e., engagement, retention and performance. For many women, symptoms impact them when they are in senior roles and at the peak of their careers.

“One of my senior colleagues took a demotion as she was embarrassed, she made some mistakes, and I felt she didn’t feel like she could say, and it was just too much”
Workplace manager

This no doubt also contributes to the increase in the gender pay gap that we see for women in their 40s, 50s and 60s: 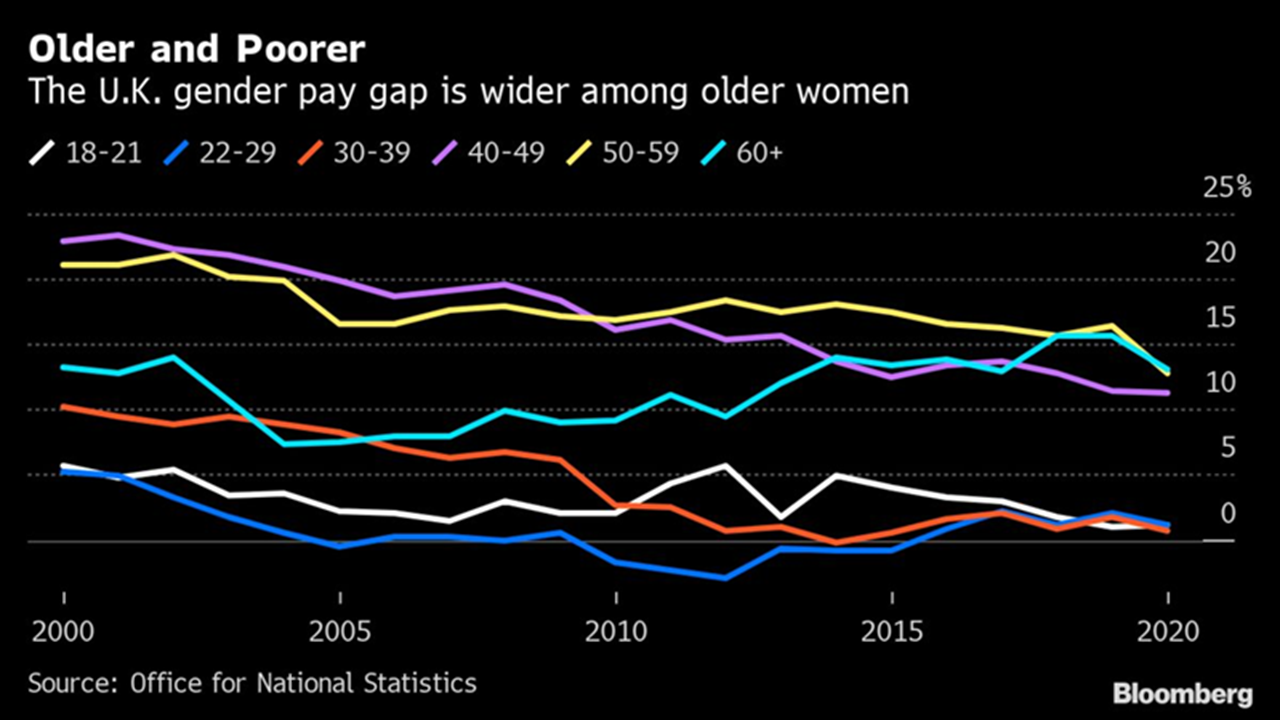 How can businesses factor in the needs of employees going through the menopause?

The menopause is still a taboo at work

Despite the increasing conversations about it, the menopause is still a taboo subject in the workplace, with around half of the menopausal women interviewed in one survey saying they didn’t discuss their symptoms with their line manager: 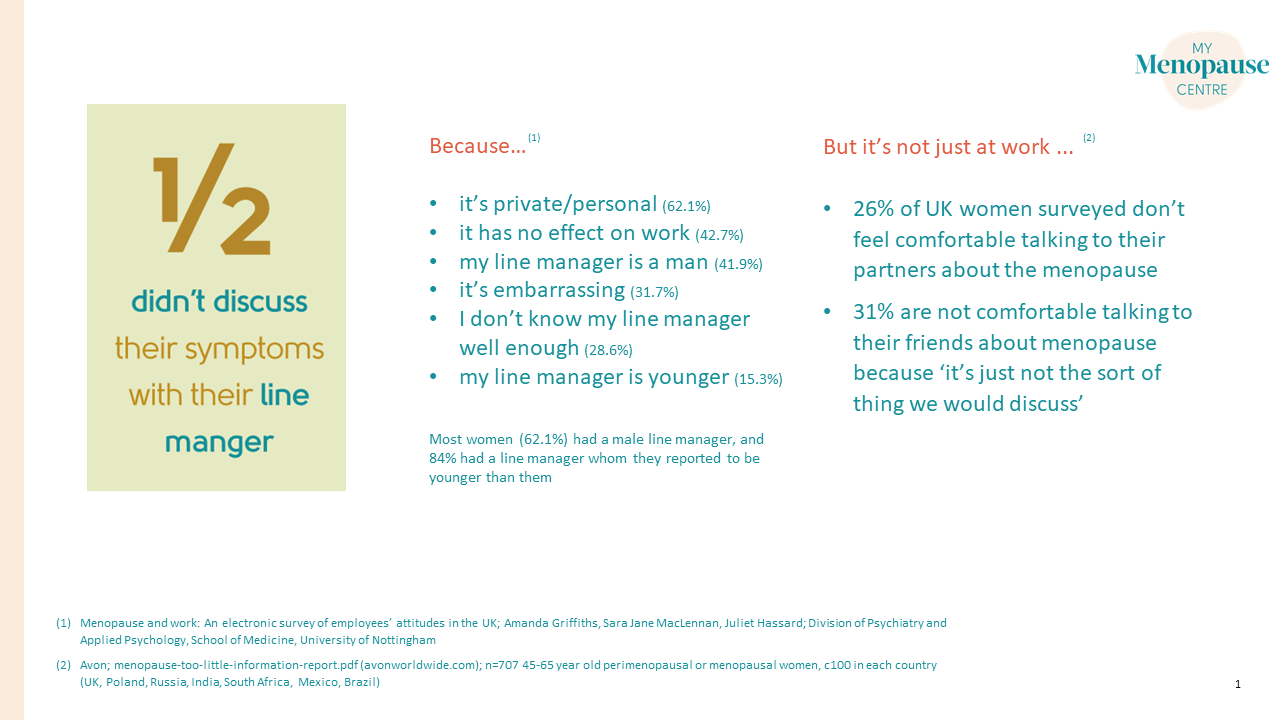 Too many women don’t feel supported at work

Women also do not feel supported at work (a survey by Nuffield Health found 72% of female workers suffering symptoms said they felt unsupported at work, even though 1 in 5 said their symptoms have a detrimental impact on their work[10]) and there is appetite for menopause policies and access to advice and support[11].

In My Menopause Centre’s work with BritainThinks, women interviewed were largely unaware of policies to support women through the menopause at work and were often uncomfortable discussing the issue with their line manager (especially if they were younger and/or a man) – meaning that they were left feeling that they “just have to cope”.

More support would, unsurprisingly, be welcomed.  Nevertheless, there is a desire for support; in an Ipsos MORI survey[12], among the women interviewed whose employer did not offer any support:

How can practices addressing workplace discrimination relating to menopause be implemented?

What can organisations do to support women going through the menopause?

Developing and implementing a menopause policy is a great first step to ensuring that women are supported and not discriminated against because of the impact of their menopause symptoms. And as the above research demonstrates, it would be much welcomed.

However, while creating a menopause policy is incredibly helpful and provides a great foundation, in and of itself it’s not enough. Our research indicates that to be effective, policies and support needs to be championed from the very top of the workplace so that it becomes embedded in the organisation’s culture.

One workplace manager interviewed described the transformational effect the CEO talking about her experience had:

“They do drop-in sessions, and the CEO was really good and open about her situation and that encouraged other people to be open, and that opened up a lot of doors.”

The CIPD offers some great advice on what to include in a menopause policy, as does Menopause in the Workplace, who offer CPD accredited menopause training for organisations, and who have also recently launched a menopause accreditation for employers. Channel 4 has also made its menopause policy publicly available, as has the agency Dark Horses.

We’d love to hear from you