Business owner, Meera Bhogal, 53, from Middlesex, experienced a decade of symptoms before she realised it was the perimenopause. Now she’s on a mission to make sure no-one else suffers like she did. 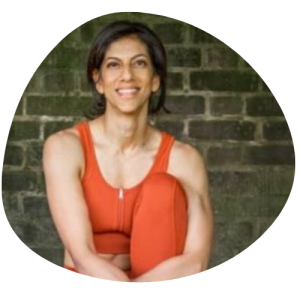 ‘The Perimenopause Took Me Completely By Surprise’

‘If you’d asked me what the menopause was 10 years ago, I would have told you this: it’s when your periods stop, you can’t have children anymore and it happens to much older women. That was the extent of my knowledge. I’d never even heard of perimenopause!

In the South Asian community, women’s health isn’t talked about generally. In fact, not long ago I was talking to a group of South Asian women about menopause and one of them said to me “This doesn’t happen to Asians. This is a white person’s disease.” And she was younger than me!

So, when I started experiencing perimenopausal symptoms at 40 that went on for ten years, I had no clue what was happening to me. It started with my hair noticeably thinning. Then night sweats which disturbed my sleep because I’d need to get up and change my nightwear. I also experienced stiffness and joint pain which often made it difficult to get out of bed. As a keen runner who’d done half marathons, recovering after runs became harder. But I kept pushing through, thinking: “Maybe I’m eating something wrong? Maybe I’ve got a bug?”

After a few years of this, my yoga teacher saw I was exhausted, and low, and asked me about it. I broke down, explaining that I didn’t feel like the same person anymore. She asked if it felt like an alien had taken over my body. And that’s exactly what it was like. I was shocked when she mentioned menopause though – but I brushed it off, convinced it was something that happened to older women.

Instead, I decided to give my diet and lifestyle an overhaul. I’d always been interested in nutrition due to suffering with IBS and being gluten/dairy intolerant, so I delved a little bit deeper.

I cut back the amount of alcohol I drank, started to eat certain types of fats and collagen for my joints and ate more foods that would help my gut health.

Not long after that conversation, I had a smear test and casually suggested to the nurse that I thought I might be going through the menopause. But she looked at my date of birth told me it was too early. I didn’t push it any further.

When I was about 45 my symptoms hit a peak. My night sweats got so bad that my husband Harry and I would have to get up twice a night and change the saturated sheets and duvet. Then my periods became extra erratic and heavy, to the point I couldn’t get off the toilet because I was bleeding so much. I ran a nursery business and would sometimes have to phone up and say I couldn’t come in.

For about five years I had to carry a bag everywhere with spare clothing, tights, underwear and a packet of pads. Looking back it seems crazy that the penny hadn’t dropped but, with no-one to talk to about it and hardly any information about it anywhere I just wasn’t any the wiser.

Then came the brain fog. I’d often say to Harry that I needed to get tested for Alzheimer’s because I couldn’t focus or concentrate enough to read a full email, a book, watch a TV show or film.

I was used to being super-efficient with a brain that goes 100 miles an hour, but at work I had to delegate more and ask people to double check things I’d written in case I’d missed out words. Everyone thought it was just because I was juggling so much. I told myself I was just distracted. I think I was too scared to look into it further.

Around a year later, I saw a GP because I was suffering from what I thought was work-related anxiety – something I’d never experienced before. She didn’t mention menopause and I didn’t ask, instead she gave me a prescription for anti-depressants. At 47, I went back for my 5-year smear and mentioned menopause but was again told I was too young.

It was only a few years ago, when friends and other women who were going through the menopause) started talking about their symptoms that I realised I had been going through perimenopause.

Looking back, I wish I’d been equipped with information. I actually think education about it should start at school! If I’d known what I know now, I’d have investigated and explored HRT and may have gone on it from about 43 to 48 because that was when my symptoms were worst. I wouldn’t have had to suffer!

I’m now post-menopausal and wanted to do something to educate other women, so a year ago, I launched Don’t Pause for Menopause, an eight-week course via my wellness platform to arm women with nutrition, lifestyle and exercise advice to help them navigate menopausal changes.

I really want to help remove the stigma of the menopause and open up conversations. Because the more we talk, the better this will be for everyone.

Remember, it’s likely you’ve got like a third of your life still left, so why not make it as good an experience as you can? After all, knowledge is power.’

To find out more about Don’t Pause For The Menopause, visit https://meerasmadefromscratch.co.uk