Journalist Lebby Eyres turned her midlife redundancy round into a huge positive - rowing the Atlantic as a member of a four-women crew. Perimenopausal at the time, the challenge was the ultimate fight-back against the difficult emotional and physical symptoms that she was experiencing. She’s 51 and lives in London. 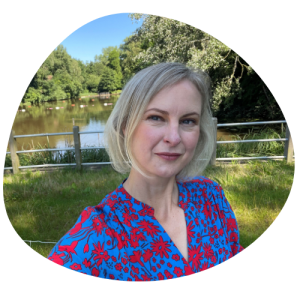 ‘When I found myself agreeing to join an all-female team rowing the Atlantic in early 2022, I’d just been through months of perimenopause symptoms that were making my life miserable. Although my periods were always regular, they’d become much heavier, and I’d also been suffering with night sweats and disrupted sleep. It coincided with a stressful time in my life. During my 40s, I’d had to deal with the death of my father and a busy job as a magazine editor.

Suffice to say that when I subsequently went through the trauma of being made redundant, I was a mess.

I remember one morning calling a doctor friend in despair because I’d hit rock bottom and felt like I was going mad. When I met her in the park and poured out my feelings, she told me that, apart from the menopausal symptoms, the feeling of being middle-aged and irrelevant that stemmed from the menopause was at the root of my unhappiness.

And that’s when I got offered the chance to do something amazing – to be part of a four-woman rowing team, racing across the Atlantic in the Talisker Whisky Atlantic Rowing challenge.

I like physical challenges. I’ve always power-walked marathons and get immense satisfaction from competition and pushing myself to the limit. As a student, I’d rowed in the Women’s Boat Race, representing Oxford and in 1995, and went on to row for Tideway Scullers and England.

Having hung up my oars for 25 years, I’d recently started rowing again, knowing that upping my fitness would ease the menopause symptoms. I wasn’t firing on all cylinders, suffering with terrible joint pain, which I’m sure was linked to the menopause. The fact that I was overweight was undoubtedly a factor. But the way I felt about my life at the time, I felt galvanised to do something extreme. I knew I just had to say yes.

We were four mums, so our team was called The Mothership. At 50, I was the oldest, with the others aged 43, 45 and 48. We had 11 kids between us and were all at various stages of perimenopause and menopause, so we were all dealing with slightly different things.

The row was amazing, but gruelling. We’d do a two-hour on, two-hour off shift 24 hours a day, so you’d only ever get 90 minutes’ sleep. For the first week, everything just burnt with pain. But then after a week, your body starts getting used to it and then you start to feel superhuman.

When I was crossing the Atlantic, my periods ceased for a while – due to the stress of life at sea and weight loss. It was an incredibly tough race. Competitors were of all ages – men, women, young, old. We were racing for 3000 miles, neck-and-neck with this other crew, just miles apart. But everyone was so lovely to each other. It was like stepping into an ideal community. Completing the race after 44 days was such a high.

Some people think repeating the same action over and over again must be boring, but actually, it’s the perfect form of mindfulness. You are constantly trying to improve on the last stroke and so there is no room in your head for negative thoughts or worries. Where I now row, down at the Lea Rowing Club in Hackney, is one of the most beautiful secret little spots in London. It’s my happy place.

I think the race gave me more of a Carpe Diem approach to life. Crossing the Atlantic, I discovered how resilient our bodies are – yes, even during menopause – and my knee joints haven’t ached at all since I came back. I lost so much weight. I do believe that being in the best physical shape we can be is the best way to tackle our 50s. It’s no longer about looking good on the beach (although that is a plus!), it’s about being able to get out of bed in the morning!’