Geraldine Joaquim, from West Sussex, came through breast cancer treatment only to find herself dealing with raging hot flushes. Unable to take HRT, she had to find other ways to manage her symptoms 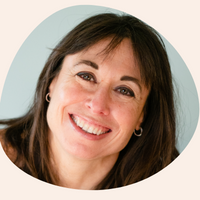 As told to Andreina Cordani

‘When they first appeared, my menopause symptoms were no big deal – just the occasional hot flush, a low tolerance for alcohol and weird static electricity – I kept zapping my poor dogs and cat! I could cope with all that but what I found difficult was the mental shift.

At 48, I had a lot to be thankful for. I had left my high-pressure corporate job and now had a career I loved, as a hypnotherapist specialising in stress management. I had a wonderful husband and two lovely daughters. But still, it felt like my womanhood was disappearing, like somebody had put a big neon sign over my head saying: you are getting older. Nobody likes to think about their mortality.

Then two years later in January 2020, I went for a routine mammogram and they found something. No lumps, no cancer, but some “unstable cells” that needed to be monitored.

I had tests, biopsies, and six months later the cells were removed. I was hoping that was the end of it, but afterwards my consultant broke the news that those cells had turned cancerous.

Part of me was panicking, wondering how I was going to tell my girls, who were 11 and 13. But in that moment my stress management training kicked in. I forced myself to take a breath, to concentrate on what the doctor was saying, to ask questions.

I found out that all the cells had probably been removed, but I’d need surgery again and further tests to be sure. It was slow-growing and highly treatable. I tried hard to stay focused on that positive side.

Still, as I walked out to the car park feelings of shock overtook me. When I saw my husband waiting there – he’d left work early to come and surprise me – I just burst into tears.

Menopause had made me think about mortality, but there’s nothing more stressful than being told you have cancer. I felt powerless, bouncing from one medical appointment to another, hoping for the best and trying to shelter the girls as much as possible.

In the middle of this scary time an ad popped up on Facebook for a well-woman online course and I signed up.

I started eating for my wellbeing, exercising to lift my mood. The NHS staff were amazing and I felt so supported by them all, but it felt so good to do something positive for myself instead of waiting for the next prescription or appointment. I enjoyed the course so much that I kept on with my studies and eventually qualified as a wellness coach.

Thankfully by November 2020 the cancer was gone. We didn’t exactly celebrate as we were in the middle of lockdown but it was still such a relief. I was prescribed a round of radiotherapy and the drug tamoxifen as a belt-and-braces approach to stop the cancer from coming back.

But as soon as I began taking the tamoxifen, I started to get raging hot flushes every night. On the worst nights it would feel like I’d done nothing but doze and in the daytime, the exhaustion took its toll. I was snappy, short-tempered, unable to concentrate. Simple decisions felt like too much and the healthy diet went out the window as I overate to compensate for my lack of energy.

Many of my friends raved about HRT but because my cancer reacted with oestrogen, hormone treatments weren’t an option for me. I felt like everyone else was on the party bus, and I wasn’t invited.

Coming through cancer taught me to find a way to take control. I started to search for other solutions. I tried acupuncture, although sadly that didn’t work for me. And cold water therapy was too uncomfortable!

Thankfully some things did work – daily yoga helped my body relax. I started eating to improve my gut microbiome, making my own yoghurt and eating more fermented foods. I realised alcohol made my symptoms worse so I cut back on that. I read about links between hot flushes and blood sugar levels, so decreased my sugar intake too.

I also started skin brushing every morning – light brushing all over my body towards the heart after a shower. It’s so invigorating – you can feel all your nerve endings tingling.

I overhauled my whole lifestyle and although the hot flushes didn’t stop, I could cope with them.

I’ve realised that while HRT is great, it’s not a magic pill. It can treat our symptoms, but we have to take responsibility for our own health too. We can’t just slap on patches or gel and then continue eating cream cakes, caning our livers and dodging the gym! And yes, HRT can help with bone health and heart issues but you can also protect yourself by eating well and exercising.

These days, I’m coming out of the other side of menopause and soon I’ll be shifting off tamoxifen onto new medication. And I’m OK with that. I know now it’s not the end of everything. Menopause is like an airlock – the door behind you is closing and another door will open in front of you. Use this time to re-adjust and get to know your own needs. I’m now more in touch with my body at 52 than I have ever been and feel so much better for it!’