When Dawn was thrown into early menopause following a hysterectomy, she found the workplace a pretty unsympathetic place. Now a chief executive, she’s using her clout to make sure other women feel properly supported by introducing a menopause policy at work. 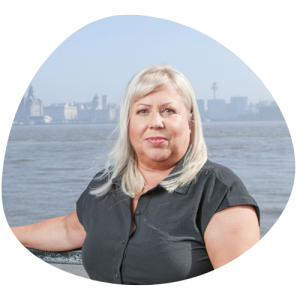 When I was in my early 30s I suffered really badly from endometriosis. It was picked up when I fell pregnant with my first child and the pain became crippling over the next few years. The doctors decided that a partial hysterectomy, removing my womb, was the best way to help the pain. Unfortunately, it didn’t do the trick so two years later they took out my ovaries as well.

I’d had two children by the time I had the first operation, so I was happy from that point of view, but nothing prepared me for being thrown into menopause so quickly after the second one, aged 37. I’d had all my bits removed so of course I understood on some level it was going to happen but the hot flushes kicked in literally within a month of the surgery – I guess around the time my first cycle would have happened.

When I went back to work I still had to work on full throttle, even though I was still recovering. It was really stressful having to manage the symptoms as well as having to explain over and over again that I was going through early menopause. I’d be sitting in meetings with perspiration dripping down my face, asking to sit by the window, and my colleagues just didn’t seem to understand at all – especially as I was relatively young to be going through it. I guess I didn’t fit with their idea of what a menopausal woman was.

I learned coping strategies, like always keeping tissues in my pocket and a fan on my desk – but people would still always ask me what was wrong.  I’m quite an extrovert by nature so I wasn’t frightened of saying ‘I’m having a moment’, but it could still be embarrassing and exhausting. It was such a male environment – I’d usually be in meetings with a room full of men so I felt quite alone in what I was going through.

So after about six months of struggling through, the doctors suggested HRT to help manage the symptoms. It was a bit of trial and error at first but after trying a number of patches and tablets, I finally found one that suited me. While the symptoms never completely disappeared, I found the combination of HRT and eating more healthily eased them enough for me to get on with life.

After about 10 years though, I had to come off it (the views about taking HRT long-term were different then), so at the age of 47, my menopausal symptoms came back, especially the hot flushes. I had to go through the whole process of explaining my symptoms all over again, and it fell on deaf ears just as before. I felt I’d hit a wall in terms of getting any understanding.

Eventually I left the banking world and moved into the private sector. Things did feel different – suddenly I was working with more women, so they ‘got’ what I was going through and were more sympathetic. And I was that bit older so fitted the image of a menopausal woman more. But I still found myself having to apologise for my symptoms.

I realised that, even though some of my colleagues (mostly the women!) were a bit more empathetic, the firms themselves still had no understanding of the menopause and what it could mean for their staff. It became evident that my male managers had an unconscious bias, with little or no education on how to support someone like me.

I became increasingly aware that something had to change. Especially when I got divorced and became the sole breadwinner for my family. I had to get up and go to work no matter how unwell I felt – and no one was going to cut me any slack where I was!

Not long after, I joined my current firm, Access2Funding, and, as chief executive, I finally had my opportunity to make that happen!

So I started talking to my contacts in Liverpool to find out what sort of menopause policies other firms had – and it turned out the only place that had one was the NHS. So I slowly started putting ours together, modelled largely on my own experience (basically, how not to do things) and now we share it with lots of other organisations.

It includes a training session for every colleague, covering everything from what the menopause is and the common symptoms, to what our legal obligations are in terms of not discriminating against someone because of their gender. We also give advice both on how to talk to your manager if you’re going through it, and to managers on how to support their staff.

It’s for our male employees as much as our female employees, because it’s just as important that men are educated so they can understand how to help their colleagues, as well as their wives, mothers and sisters.

We’ve also made sure people are able to do flexible working, like starting at 10am just to ease that pressure of running around in the morning if they’ve not had a good night’s sleep.

It can make a big difference to people – just that feeling that they can open up about it, or say ‘I’m having a bad day’. The response from the team has been amazing – I’ve even had letters from colleagues, male and female, saying thank you for introducing the policy.

I’m not just focusing on my own firm though. I go out to networking events and talk about how important it is to offer the right support to women, and I share our policy with other companies so they can introduce their own. I want to get to a place where menopausal women don’t feel they have to quit because of their symptoms – we have so much talent and experience to give!

I’m almost through it myself now. I still have the occasional hot flush but they’re getting better. I’ve learned it doesn’t help when I’m anxious or rushing, so I try and stay calm. I feel like I’ve got my mojo back – and it feels so good knowing I’m helping other women get there too.

Dawn, CEO of Access 2 Funding Specialists Limited, will be the guest speaker at the Liverpool Ladies Network Spring Lunch on 31st March, sharing her story to inspire and educate other workplaces on all things menopausal. To find out more details, head here:  https://www.eventbrite.co.uk/e/lln-lunch-31st-march-2022-tickets-293258472987?aff=ebdsoporgprofile