Lorraine Candy, 53, is an author, editor and podcaster. She co-hosts the Postcards From Midlife podcast with Trish Halpin and her first book 'Mum what's wrong with you: 101 things only the mothers of teenage girls know" was a Sunday Times top 10 best seller. She is a former editor of Cosmo, ELLE and Sunday Times Style and a mum of four children aged 10 to 19. She is currently writing a new book about the experiences of women in midlife. 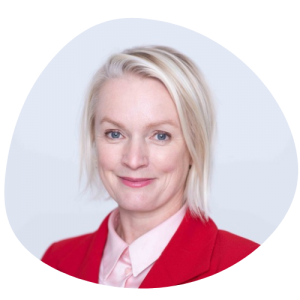 1. The best thing about the menopause

I am not sure I can find an upside to be honest. It caught me by surprise and knocked me for six. I’d really like to be 25 again knowing what I know now! Perhaps the liberation from worrying about everyone and everything all the time has been a good thing. I have also found it’s very powerful being able to say ‘No’ confidently in midlife. I have always been good at setting boundaries and not worrying what people think but in midlife it is sort of more acceptable somehow. I am still working out who I am in this second part of my life and who I want to be as my children leave home, my previous career fades into the background and my life changes with age. I don’t mind getting older though or looking older, ageing is a privilege, I just wish I had more time to do all the things I plan. I’d love to live to 125!

2. The hardest thing about the menopause is….

For me the hardest thing was feeling as if I was going through it alone. My symptoms started when I was 47 and I thought I’d got a brain tumour, I couldn’t remember anything and even forgot which side of the road to drive on. I was waking up with night sweats and I had panic attacks for the first time in my life. I was also extremely depressed. I blamed myself and thought having a job, four kids, and a marriage was too much and had broken me or that I was a failure for not being able to cope. I was offered antidepressants several times by my GP but I knew something else was going on. I am ashamed to say I didn’t know anything about the perimenopause even though I was editing a woman’s magazine and also a journalist who covered many health stories. No one talked about it five years ago and that is a scandal. It wasn’t until I talked to a friend, fellow editor Trish Halpin, about it that I realised we were both going through something similar and if we were then other women were too. We started to investigate it and that is why we started the podcast Postcards from Midlife, which has been a surprise success for us at this stage of our careers.

3. My lightbulb moment was….

When I realised the changes happening to me physically and emotionally were caused by hormone fluctuations and when I found out the truth about HRT being safe to take, much safer than we think. About a week after I began taking the right dose I found my mojo again; I was lucky the effect was so fast – suddenly everything was in technicolour again. I got my libido back, I could remember things, my hair stopped thinning, the list of good things was endless. But I was also furious I had put up with all the hellish symptoms for so long (about three years) because of the myths and misinformation around prescribing HRT.

4. My selfcare superhero is…..

My 18-year-old and 19-year-old daughters. Those girls really take care of themselves, and it has been a revelation watching them do that. They make sure their beauty routines are right for their skin, they watch what they eat and they obviously get as much sleep as possible but what I like most is the way they ask themselves how stressful something will be before they do it, they don’t seem to be in that manic Gen X rush to achieve everything, they care about their mental health which is a good thing.

5. I couldn’t live without…

Cold water swimming: I discovered it 7 years ago after injuring my knee running and it has been the thing that has improved my life most in perimenopause and menopause. I feel amazing after a cold-water swim or dip, just amazing. I love being in a lake or the sea with like-minded friends and a huge midlife community of supportive strangers that I have met through swimming outside. Everyone is doing it now but when we started it was quite a small community and I had such a lovely time meeting new women of a similar life experience bonding over something that made them feel a little bit brave in life.

Listen to Postcards From Midlife wherever you get your podcasts.
‘Mum, What’s Wrong With You?’: 101 Things Only Mothers of Teenage Girls Know, is published by Fourth Estate and available from all good booksellers.